Russian Ecological Society (RES) calls upon the international community to participate in solving the global problem. Fukushima-Daiichi Nuclear Power Plant is going to dump tons of tritiated water into the Pacific 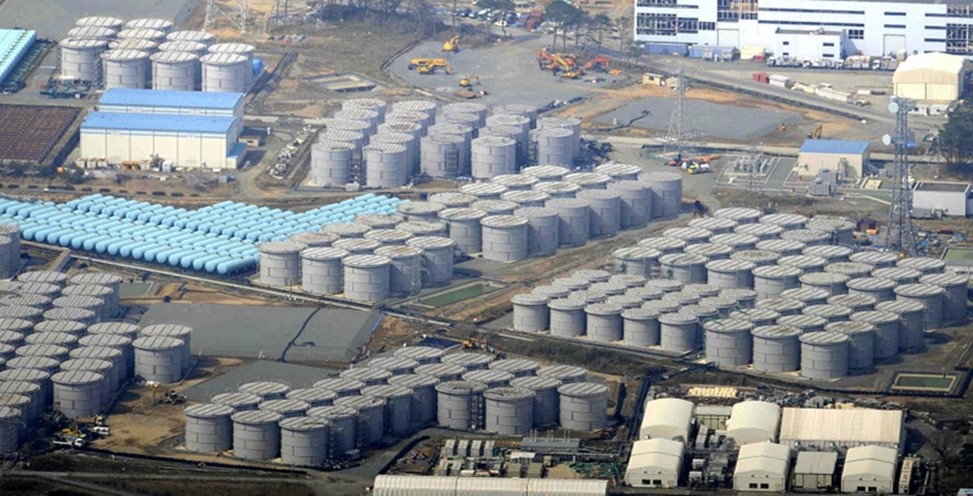 March 15, 2011, there was an accident at the Fukushima-1 (Fukushima-Daiichi) Nuclear Power Plant. The earthquake and tsunami destroyed backup generators of the nuclear power station. The Japanese used more than 300 tons of water every day to cool the reactors. Due to such measures, the problem of liquid radioactive waste (LRW) has been rising for five years. According to some experts, there are 1 million tons of tritiated water at the power plant.

The Tokyo Electric Power Company (TEPCO) that owns the Fukushima-Daiichi Power Plant is now considering the possibility of dumping tritiated water in the Pacific for 30 years. It argues that there are no other solutions.

However, Japan was looking for an environmentally friendly and economically viable solution for years. There is no need to abandon the search for alternative ways because the future of generations depends on our decisions.

Because of tritium reclamation, tritiated water turns more biologically active than tritium hydrogen itself. Therefore, even if the high mobility of tritium creates problems of retention in reactors and storages, it is necessary to prevent the dumping of tritiated water into the ocean.

Tritium is hard to detect due to its low radiation energy, which makes it even more threatening. Tritium rapidly spreads in the environment because the wind and powerful ocean currents carry it over long distances, thus it can reach the shores of North America. It also deposits to surfaces after rainfall.

Even though a single use of tritiated water does not lead to long-term accumulation of tritium in the body, we are not able to control tritium in the Pacific, full of life, including commercial fish. We may get 80-85% of the radionuclide with food and water; it is even more efficient migratory way than inhaling.

Tritium migration is the ability to travel through space, dispersing, or concentrating in specific cells.

Studies of the effects of tritium on the ecosystem

Canada’s nuclear power plants faced the challenge of releasing tritium into the environment multiple times. Dr. Ian Fairlie’s 2007 report provides data on the concentration of tritium in drinking water, air, and food near Canadian nuclear power plants. While it is true that emissions from enterprises are high, radiation protection regulators argue that these emissions are safe.

Canada experienced the spread of tritium through the evaporation of water, but the scientific community can rely on this experience, as through ocean tritium can easily enter the atmosphere.

Through nuclear exchange, tritium can easily penetrate all materials that contain hydrogen: plants, animals, and humans.

Sources: Tritium in the Canadian Environment: Levels and Health Effects. Report RSP-0153-1. Prepared for the Canadian Nuclear Safety Commission under CNSC contract no. 87055-01-0184 by Ranasara Consultants and Richard Osborne. Data from Health Canada (2001)

The value of 0.02 Bq / m3 is very close to the bottom row of the first Figure. Most points in Figure 1 are up to 10-100 times the background levels; in particular, the tritium air concentration level at 1 to 2 km from Pickering, as reported by Health. Canada (2002) is 50-1,500 times the Canadian background level.

Canada’s history is known for multiple tritium leaks to the Great Lakes. To cite just a few:

In 1979, the concentration of tritium in groundwater reached 2.5 MBq/L after the release of 666TBq at Pickering.

In 1991, a leak from Chalk River Nuclear Laboratories into the Ottawa River elevated tritium levels to 150 Bq/L.

In 1992, a tube break at Pickering-1 released 2,300 TBq of tritium into Lake Ontario. According to the United Nations Scientific Committee on the Effects of Atomic Radiation (UNSCEAR), the global average dose of natural background radiation from all sources to humans is about 2.4 mSv per year.[1]

Tritium concentrations in drinking water elevated significantly and continued to increase in most of Great Lakes.

Impact on health might be detected through epidemiological studies, especially among those most exposed. However, the health effects of radiation are difficult to tell, because radiation-induced cancer is no different from the usual one, and there are many cases of cancer. Clarke et al. (1989, 1991) conducted several similar studies that showed an increase in childhood leukemia, but the results of these studies were framework rather than definitive outcomes.

Clarke et al. (1989, 1991) studied mortality and incidence of childhood leukemia near nuclear facilities in Ontario. The first report (Clarke et al. 1989) considered leukemia deaths and cases at ages 0–4, and the second (Clarke et al. 1991) considered cases and deaths at ages 0–14. Data for areas “nearby” (<25 km), the 16 reactors at Bruce and Pickering over the period 1971–1987, were pooled together to increase statistical significance. The findings were 36 leukemia deaths at ages 0–14 vs 25.7 expected (SMR = 1.40, 95% CI 0.98–1.9). Indicating an excess leukemia mortality with borderline statistical significance. However, the confidence intervals were wide: the data were consistent with there being no increase and with there being a 90% increase in leukemia.

Johnson and Rouleau (1991) studied birth defects, stillbirths, perinatal, neonatal, and infant mortality within 25 km of the Pickering Nuclear Station. The incidence of central nervous system defects was significantly elevated in Pickering.  There was a statistically significantly raised prevalence of births with Down syndrome in Pickering (24 observed vs 12.9 expected [relative risk = 1.85, 95% CI 1.19, 2.76]), which corresponds to the Chernobyl data.

Dr. Ian Fairlie concludes that the radiation protection agencies are obliged to recognize the dangerous nature of tritium and substantially increase its dosage coefficient.

Kirchner’s study [Kirchner, (1990)] sums up the dangerous properties of tritium:

(ii) rapid nuclide transport and cycling in the biosphere,

According to EPA (the United States Environmental Protection Agency), once in the body, tritium disperses through it, accumulating in soft tissues.

Tritium, being an isotope of hydrogen, behaves chemically as hydrogen and is therefore capable of replacing it in all compounds with oxygen, sulfur, and nitrogen, penetrating the protoplasm of any cell. Once inside the cell, it becomes organically bound, and the body itself begins to emit beta waves.

It can cause cancer, leukemia (blood cancer) in particular.

A study by Shigeta et al. found that tritium damages DNA like 252 Cf neutrons (an isotope of Californium used in radiation therapy).

Importantly, tritium in food is more dangerous because it assimilates in tissues without prior oxidation,  which means that tritium in foodstuffs can be 4-5 times more than researchers can detect [Travis CC et al. (1984)].

Tritium changes the metabolism of the body cells, which causes tumors. The report of Dr. Ian Fairlie also confirms the danger of tritium that gets into the food chain.

Figure 2.  Tritium concentrations in the moisture of vegetation and foods

Sources: Reproduced with permission of the CNSC from Tritium in the Canadian Environment: Levels and Health Effects. Report RSP-0153-1. Prepared for the Canadian Nuclear Safety Commission under CNSC contract no. 87055-01-0184 by Ranasara Consultants and Richard Osborne. Data from Health Canada (2001).

The similarity of Figures 1 and 2 confirms that the concentration of tritium in plants is a direct consequence of tritium in air.

Once it gets into the ocean, tritium is likely to get into the entire ecosystem, into the air, and then into the cells of plants, animals, and humans.

It is worth mentioning that 800,000 tons of tritiated water from the Fukushima-Daiichi Nuclear Power Plant contains many other radioactive elements, including strontium-90, which increases the risk of leukemia, and iodine-129, which half-life can last over 13 million years.

Taking into account a report of The Japan Times that some radioactive isotopes cannot be captured by a purification system at Fukushima Daiichi (among them iodine-129, ruthenium-106, and technetium-99), The release of this mixture into the Pacific Ocean should be prohibited.

Position of the international community

The world community cannot allow tritiated water to flow into the Pacific. Given all the above facts (while it is only a small part of the research), the dump of contaminated water will inevitably change the environment and human life.

The South Korean Public Policy Coordination Office called for all necessary measures to be taken to ensure the life and health security of South Korean citizens as well as the marine ecosystem.

If Japan dumps the tritiated water into the ocean, South Korea will encounter inevitable damage: the strong coastal currents of Japan will rapidly spread radionuclides into the East and East China Seas, affecting fishing communities and large segments of the population.

June 9, human rights experts of United Nations called on the Japanese government to prevent any extreme measures until the matter is discussed at the higher international level, with the officials of neighboring countries.

In 2014, the TEPSO station operator announced an international competition for the development of tritium recycling technology. The US and Russia introduced new technologies, but due to economic reasons, Japan was hesitant to implement them.

Several years after the competition, Japan decided to cease the competition. Instead, Japan is considering two paths: the dump of water into the Pacific and its evaporation.

As optimistically as it might sound, both these paths have some flaws. Tritiated water cannot be purified like other liquid radioactive waste; the purification process will take too long. The half-life of tritium is about 13 years. The International Atomic Energy Agency (IAEA) requires radionuclides to be isolated for a period of 10 half-lives. That is at least 130 years, and when you consider radioactive and toxic impurities, it will take even longer.

The Russian Ecological Society (RES) does its best to find paths, to draw the maximum attention of the scientific community, environmental societies, and policymakers worldwide. We insist on joint discussions. Only be consolidating the forces of the international community we can find the way to solve this issue.

The Becquerel (Bq) is the SI derived unit of radioactivity. One becquerel is defined as the activity of a quantity of radioactive material in which one nucleus decays per second.